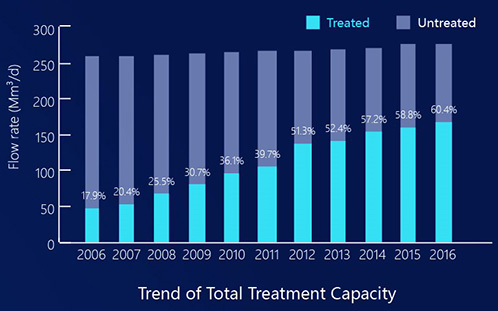 Foreign investors can bring experience and new technologies to China, where national sentiment attaches great importance to the sanitation of water for both municipal use and for the greater environment. The Chinese government is expected to spend an additional RMB 4 trillion to improve water infrastructure and household supply. Its keen support for this effort means that, apart from matters concerning water conservancy, environment and public facility management, foreign investment into the country’s waste water treatment technology is desperately needed.

The stark truth is that it is cheaper to pollute than to clean up. This is a result of systemic issues in wastewater pricing and discharge standards. So despite a high number of recorded pollution violations, companies will still continue to pollute not only because the fines imposed for pollution are still relatively low, but because it is currently cheaper to discharge untreated wastewater than to install & use the wastewater treatment equipment. Inadequate wastewater pricing also means that some WWTPs are operating at a loss. In 2015, 25% of WWTPs operated at a financial loss and had to rely on government subsidies.

There is no such thing as wastewater; only water wasted.

But this is not necessarily a bad thing. We should therefore think of wastewater as a resource; not as a burden. Wastewater can actually be a potentially affordable and sustainable source of water, energy and nutrients with proper treatment and re-use. Treated wastewater, for instance, can be used to irrigate farmland and improve food security. At the moment, over 80% of the wastewater generated globally flows back into the ecosystem without being treated or reused. On average, high-income countries treat about 70% of their wastewater; while only 8% is treated in low-income countries.

By 2030, the UN Sustainable Development Goal (SDG) requires us to “halve the proportion of untreated wastewater and substantially increase recycling and safe reuse globally.”

Energy conservation and emission reduction is a high-priority global issue. Just last year, 188 countries committed to reduce their greenhouse gas emissions as part of the groundbreaking 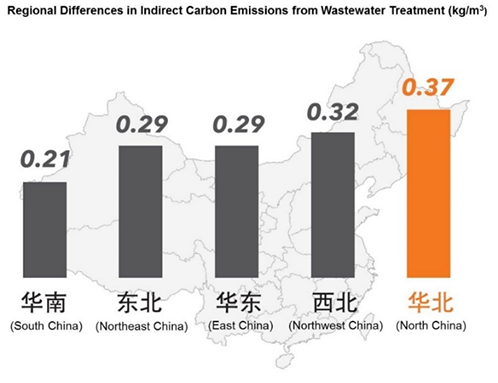 Paris Agreement. Although China’s wastewater treatment industry represents only a small slice of the total global carbon emissions reduction target, it is a high energy consumption industry that is growing rapidly, thus making it ripe for attractive energy savings opportunities.

A recent report concluded that China’s wastewater treatment industry has the potential to reduce direct and indirect CO2e (carbon dioxide equivalent) emissions by 15.7 million tonnes through the adoption of currently available advanced technologies. This represents a decrease of 39% versus emissions produced in the sector in 2015.

While these findings represent compelling opportunities to reduce direct and indirect carbon emissions, the industry needs to take steps to encourage widespread adoption of these approaches.

First, it is imperative that investment and construction decisions be made on the basis of life-cycle cost, and not simply on the lowest bid price. While these solutions may require a higher initial capital investment, those with the lowest total life-cycle cost make better financial sense, and often result in the lowest energy consumption and indirect CO2e emissions.

Second, the industry should establish emission reduction targets, as well as a standardized carbon audit process. These standardized guidelines – which have been successfully implemented in other industries – can provide the structure needed for financiers and utilities to make increased investments in emission-reducing technologies.

Furthermore, it is important to note that China’s wastewater treatment industry is not alone in these opportunities and challenges. There is a global opportunity for the wastewater treatment industry to cut its electricity-related emissions in half by implementing readily available, high-efficiency technologies. In doing so, the industry can save nearly $40 billion along the way through lower energy costs – truly a climate change policy that pays for itself. 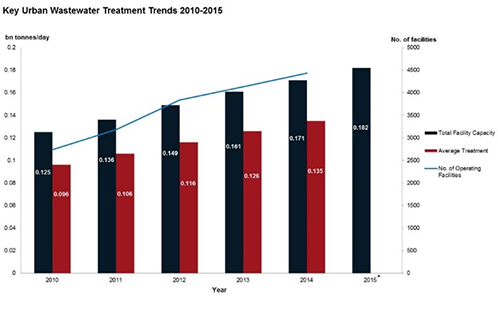 To put this into perspective, if the 2020 capacity target is achieved and 50% utilized, China will be reusing nearly triple the volume of water resources available to Beijing in 2015. The 13FYP targets are certainly ambitious and will require a significant amount of money. The investment amount needed for urban wastewater treatment and reclaimed water use infrastructure is estimated to total RMB564 billion ($82 billion). This amount is 31% higher than the 12FYP estimate and is more than the projected 13FYP investment for China’s hydropower development (RMB500 billion).

The map below shows that investment is needed where wastewater discharge is highest, namely Guangdong, Jiangsu and Zhejiang. 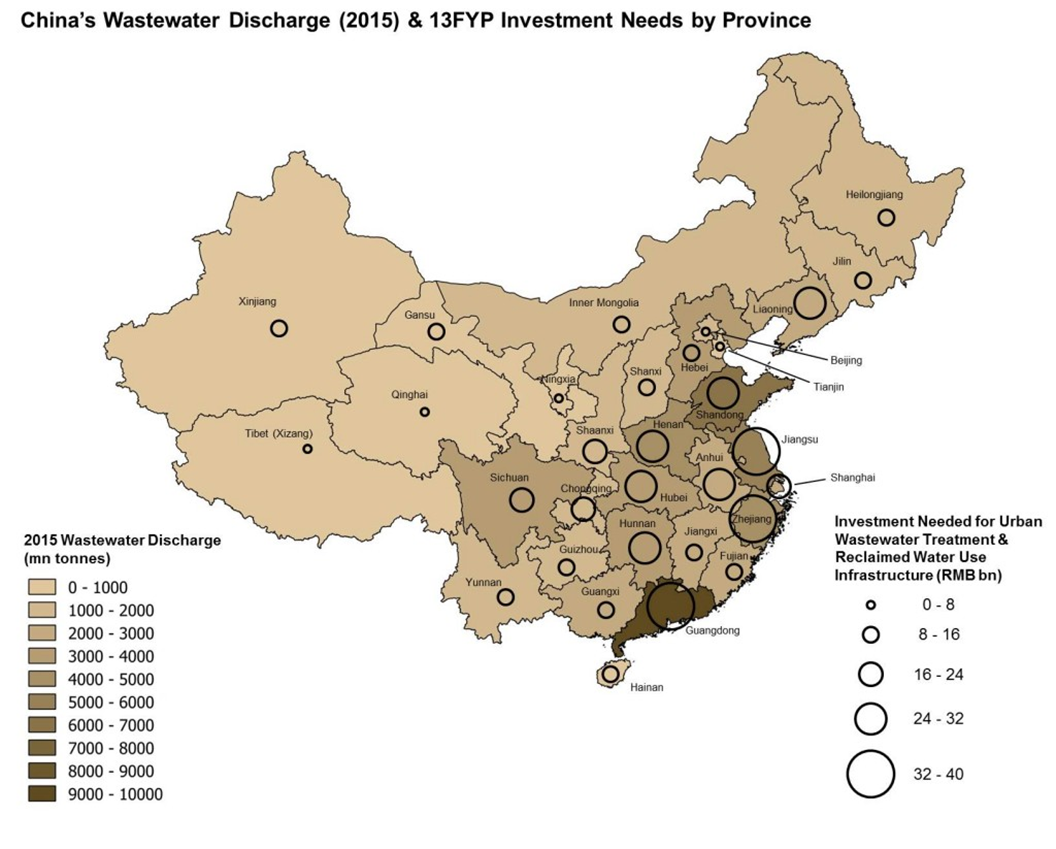 So where is the money going to come from? One method of raising the funds, as promoted in the 13FYP, is through the Public-Private-Partnership (PPP) model, which is a cooperation between the government and private capital over infrastructure and public services. As of 2016, up to RMB240 billion has been invested into wastewater-related PPP projects. The Chinese Ministry of Finance has even stated that all new wastewater projects should now follow the PPP model.

China is not just showing strong intent to turn its urban wastewater into a resource. It is also looking to do the same for industrial wastewater, which currently accounts for around 23% of China’s reclaimed water use.

The 13FYP recommends that reclaimed water use should be prioritized in projects which use a lot of water that does not need to be of high quality, particularly in industrial, irrigation and dyeing sectors. Chinese policies are strongly promoting the PPP model, especially for water. In October 2016, the Ministry of Finance (MoF) released the “Notice on the Promotion of Public-Private-Partnership in Public Services”, stating that in new waste & wastewater treatment projects, the Public-Private-Partnership (PPP) model must be applied. In fact, PPP has already been widely applied in waste & wastewater treatment projects, and in turn, this notice shows the governments’ promotion of this. PPP is a long-term cooperation between governments and private capital over infrastructure and public services. Usually, private capital is in charge of design, construction, operation and maintenance, whilst governments are in charge of supervising the pricing and quality of the projects.

The China Public Private Partnerships Center (CPPPC) was established by the MoF at the end of 2014 as a platform for policy research, information and communication. It has two broad functions: 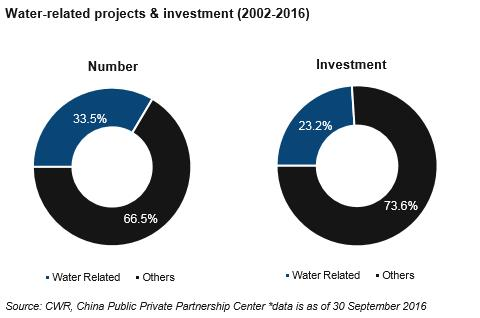 As shown in the chart below, for all water-related PPP projects, wastewater treatment projects, supply projects and pipeline network are the top 3 sectors in terms of number, respectively accounting for 25%, 14.3% and 12.2%. While for investment, pipeline network attracts the most investment, followed by environmental protection and wastewater treatment, respectively accounting for 22.5%, 14.4%, and 8.3% of the total investment in water-related projects. 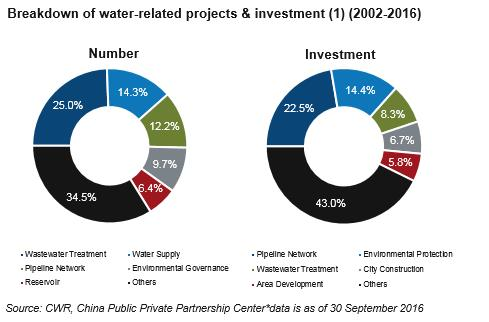 Water-related projects started to appear in 2002, but boomed in 2015. The number of projects initiated by the governments in 2015 was about 5 times higher than the total number in the last 10 years, while investment was about 6 times higher. Since there are only 31 projects in total from 2002 to 2011, the following analysis starts from 2012 to 30 September 2016.

There are 3 payment schemes for PPP projects in China: 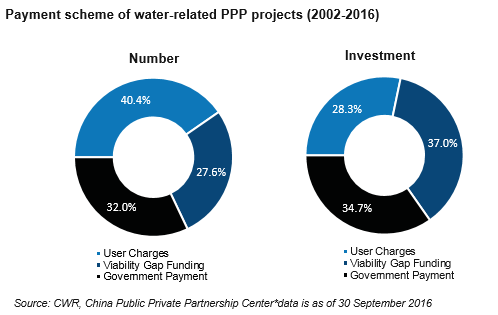 Government payment and user charges are two traditional schemes in PPP. Currently, 40% of all the water-related PPP projects adopt user charges, while it drops to 28% in terms of investment. The payment scheme depends on the project type. Usually, projects which directly face customers and have a steady cash flow adopt a user charges scheme e.g. water supply. Despite the large number of PPP projects, most of the projects are still only in the recognition phase.